BACK TO ALL STORIES 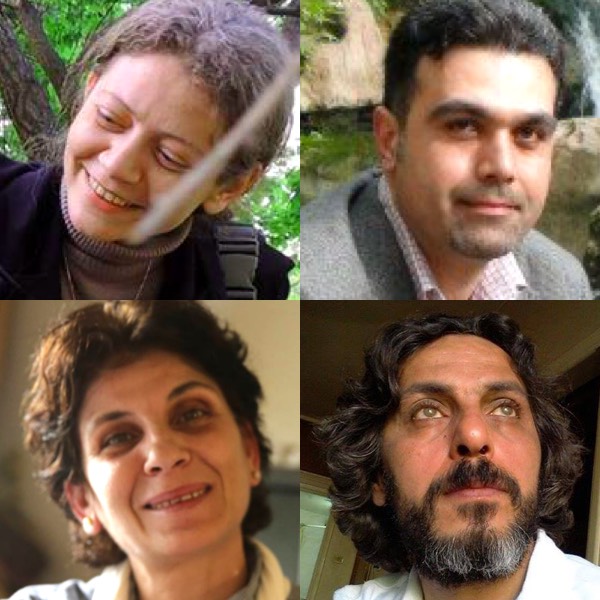 Razan Zeitouneh, Wael Hamada, Samira Khalil, and Nazem Hammadi are peaceful Syrian activists who worked at the Violations Documentation Centre (VDC), an NGO that monitors human rights violations in Syria. The four activists were deprived of their liberty after being abducted from the VDC offices in Duma, part of the Eastern Ghouta area which is under the effective control of armed opposition groups, in the evening of 9 December 2013 and has not been heard of since.

One of the most powerful groups in the area at the time of the disappearance is Jaysh al-Islam, who has so far denied involvement with the crime and appear to have made no significant efforts to investigate what happened to the four activists. Razan Zeitouneh is a Syrian human rights lawyer who worked predominantly on the cases of prisoners of conscience and other political prisoners and is a long-term human rights activist. She established the VDC. Wael Hamada is an active human rights defender.

I listen to your favorite song: Oh dawn when you rise, in the voice of Nahawand, and I think of you.

Wake all people / my beloved before all!

I cannot stop myself from wondering as those who believe in fate do: Why did all this happen to us? Could it not have happened? It could, Sammour. I cannot convince myself that “it was meant to be” for you to disappear for years; four years now, close to the four that you had already spent in the Syrian regime’s prison. Why did you have to disappear? I wish we could have avoided this ordeal.

Now that you are gone, your absence has become my cause. I live with it and struggle with it all the time. I have no idea what will come out of this struggle, but I know that revenge is mine and I shall not relent.

In the neighborhood, as you visit/holding torches of light!

In your absence, Sammour, I know that there shall be no other solution than continuing to work. I am certain that this is the right thing to do, but I do not find any comfort in this certainty. What is unequivocally right is admitting that there is no solution to your absence, nor is there any work that can possibly fill its infinite emptiness. What is unequivocally right is that you should return today. That you should have returned yesterday.

Sammour, it occurs to me that the struggle with the absent, with absence, with the unseen, is what gave rise to religions, and that the preoccupation with presence, with the visible world, left the notion of absence for religion. But I am not concerned with religion and its people. I am concerned with someone who is absent, someone who has disappeared. I am concerned with loss, bereavement, and oblivion, rather than the doctrines and beliefs that form around them and always turn into a suffocating, malicious presence. In fact, I am concerned with destroying this suffocating predatory presence which led to your disappearance. I do not know how to grieve your absence, but I deem it to be mine; a very personal thing with which I coexist, struggle and negotiate. I do not forget nor overlook it, and I do not want it to be attenuated. My grief is, in any case, a faithful companion that never leaves or lightens up.

I deem your absence to be mine not because I deny that it is a public matter that exceeds my private life, but because the public needs a new and radically different formation; one that accounts for our stories, our narratives and our ordeals. I want a public that is revered and cherished, and fashioned by the living and their names, features and pictures, their prisons and exiles; not an ignoble public that hovers like a ghost over life and the living. I do not want a public that tells me (and this unfortunately happens): “Is Samira the only one who has disappeared? Are you the only one who suffered a loss?” This public I do not want. I want a public that sees through the eyes of the collective, one in which we live and recognize each other; not a blind public in which we live like strangers, and which can only be well if we are featureless, senseless, nameless.

As four years have passed since you are absent, I think of four words that help me bear and own it; words that belong to me and concern me as much as they are – like all words – general.

The first one is pain. It is very personal and restless, and it cannot be dissolved, transferred, or shared. You and I have many friends, and I know how much they take part in our story. I know how much they hide their feelings from me because they realize the enormity and increasing gravity of our story, and they wish to protect me from it. I too want to protect them as much as I can. I often fail in doing that. We understand each other without uttering a word: that they should not be worried about me nor I about them. But be that as it may, there is always something which is impossible to transfer, share, say or write. Neither a writer who has faith in words nor anyone else can represent the pain left by absence; describe how hurtful its sharp edges are; put it in words or confine it in space or time. A lot gets lost, almost everything gets lost, in the process of conveying and representing. Things turn into ideas, into an invitation to share and sympathize. Perhaps this is all that is possible, and around it people come together and form a community. The community consoles; it is formed around consolation. The community is a cure for pain. Perhaps our community is falling apart, Sammour, because it has suffered so terribly and immensely that its members and groups are no longer capable of expression and consolation. Isolated from each other, they hide their pains and wounds in their own narrow private spheres. The community is no more.

The second word is hope. You know that I was immunized against despair in prison, but that does not necessarily mean that my hope is strong. I have a minimum of it, barely enough to resist despair and continue to work. Immunization means to take in a little bit to resist a lot; a little bit of despair to resist great despair. The hope I have is this little despair, which is necessary to go on. In this state of affairs that has been going on for two generations – that is, as long as our ages – I do not see despair today as hopelessness, but rather as death defiance, a struggle between two despairs. As I wrestle with your absence, Sammour, I see that hope today is a more radical force, more desperate than despair itself; it is that which does not abandon us when everything else does and does not surrender unless we surrender. This essential hope is synonymous to life. But this does not cancel out another kind of hope, one that is more positive: the hope we create and share with others when we produce, innovate, love, change ourselves and contribute to changing the world.

My heart is promised to them!

The third word is work. You remember how much I loved to work. Today, Sammour, this work is my remedy in your absence. It is a tool I use for creating hope. With it, I wrestle with your absence and try to make it my own. I thought that a silence that would only end with your return is the only possible punishment I could inflict on myself for the worst mistake I have ever made, that trip to Raqqa on the evening of July 10, 2013. I thought about sacrificing all my words, which is the whole of my work, on the doorstep of your absence. I thought about stopping writing permanently. But I resumed writing, not because I did not dare make that decision, but because to stop writing seemed like letting go of a weapon in the midst of a battle. Writing does not only help me defend you, or continue to fight, or continue life itself, but it may also help others in a similar situation as ours to bear the unbearable.

It would have been helpful for me, Sammour, if I had come across books, texts, or films that talk of a situation like ours, if I had known what struggles those who were in this situation faced, how they resisted, failed, despaired, hoped, and how they possibly found deliverance. Are they many? I believe that they are not few. In any case, we have to think that they are many, because in today’s world they might exist if they do not exist already, and they are more and more likely to exist.

Love is my fourth word. It unites me with you and gives me the determination to be Samira in her absence.

In front of me is a small picture of us, drawn two years ago by the Lebanese artist Mounira Al-Solh. She wrote above it in a special frame: Love for Freedom. She found in our story an inspiration related to love and freedom. There is something extremely painful in our story, and there is something rare and strange, something secret and unseen, something richly symbolic, and something multi-dimensional. I know that from the strangers I meet, both Syrian and non-Syrian. But the combination of the rare, the painful, the strange, the hidden, the symbolic, and the multidimensional is what makes it an exemplary, generalizable and boundlessly meaningful story.

This obliges me to persevere in exploring it and in looking for new ways to tell it.

Your song says: ... your lover is a stranger / and you are among your family! Your lover is not as much a stranger as you are, my absent and captive beloved, but he too is a stranger who is not living among a family. You were all his family, Sammour.